At the time it was completed in 2009, the SW Montgomery Green Street Plan was regarded as Portland, Oregon’s most innovative green street planning effort. This multi-block plan showcases a variety of green infrastructure and alternative transportation strategies along a corridor that passes through Portland State University (PSU) and into the emerging neighborhood along SW Montgomery Street.

Upon approval of the conceptual plans, construction began occurring in phases. In 2009, NNA completed construction documentation for the build-out of three blocks, including Urban Center Plaza, Smith Memorial Student Union/Cramer Hall and PSU Science Center. In addition to the 5-foot-wide “stormwater spine” that runs across the entire block, the re-graded Smith Memorial Student Union Plaza includes planters, which are fed by stormwater collected from the university’s north sky bridge that spans over Broadway.

For PSU’s Urban Center Plaza, NNA worked with the university and other partners to create several design alternatives that maximized stormwater management while retaining the spirit, programming and design details of the original plaza. Like all other blocks along the SW Montgomery Green Street, the rebuilt plaza features a 5-foot-wide “stormwater spine" that collects and treats stormwater runoff. During the restoration of the plaza’s original fountains, we incorporated a series of metal and granite landscape planters to treat and filter stormwater. The modern stormwater facilities capture runoff from the 8,000-square-foot plaza and adjacent sidewalks, offering a beautiful reminder of the university’s commitment to green infrastructure. 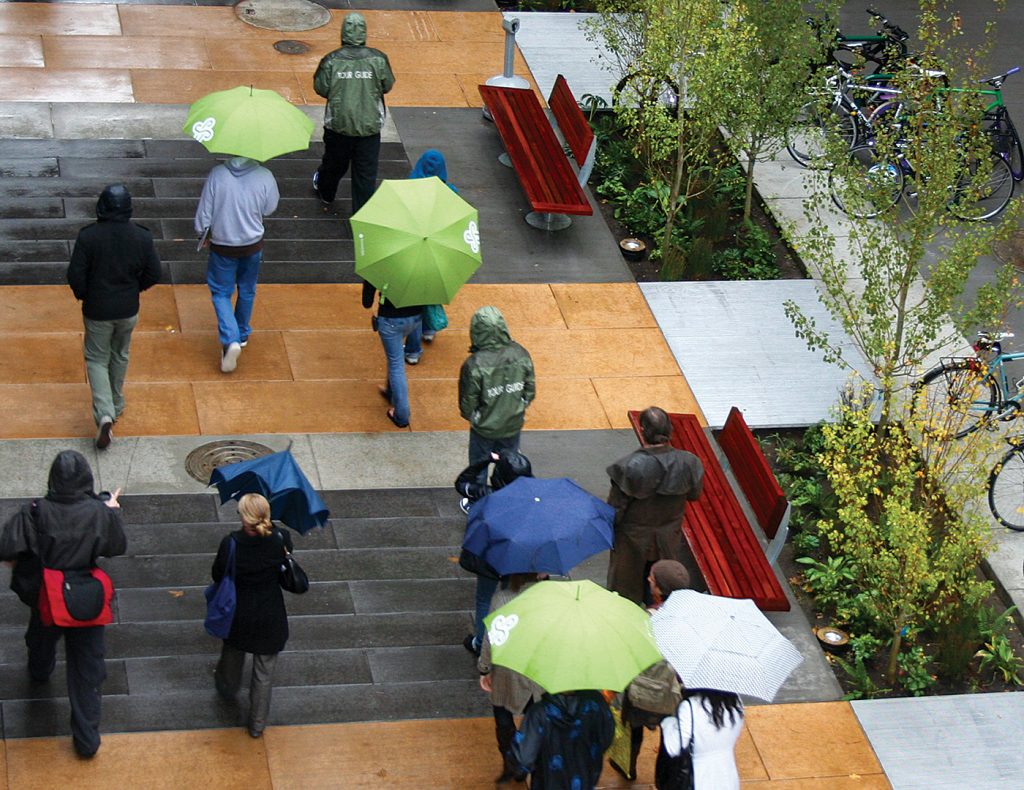 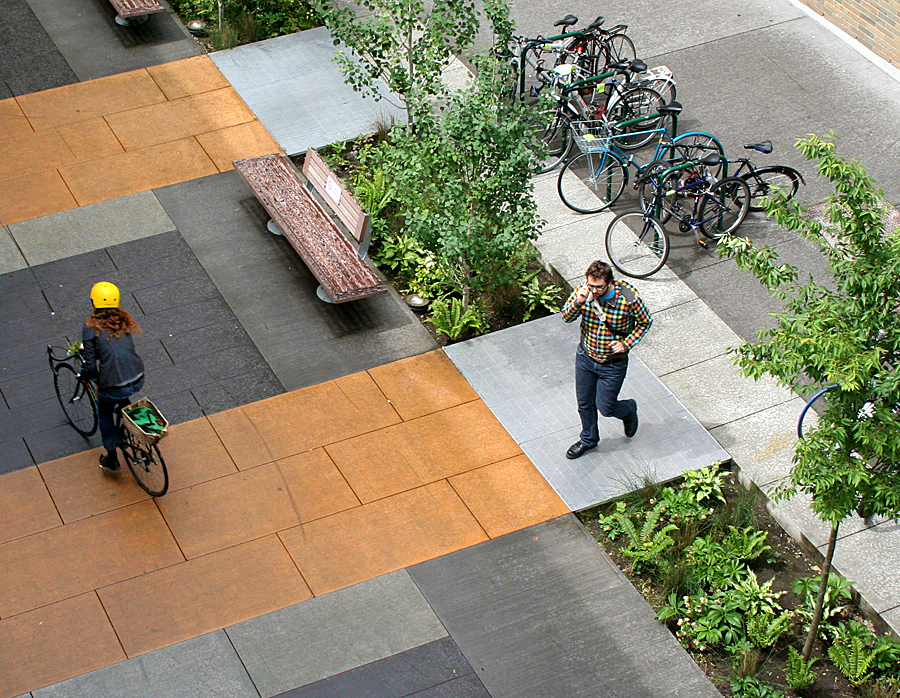 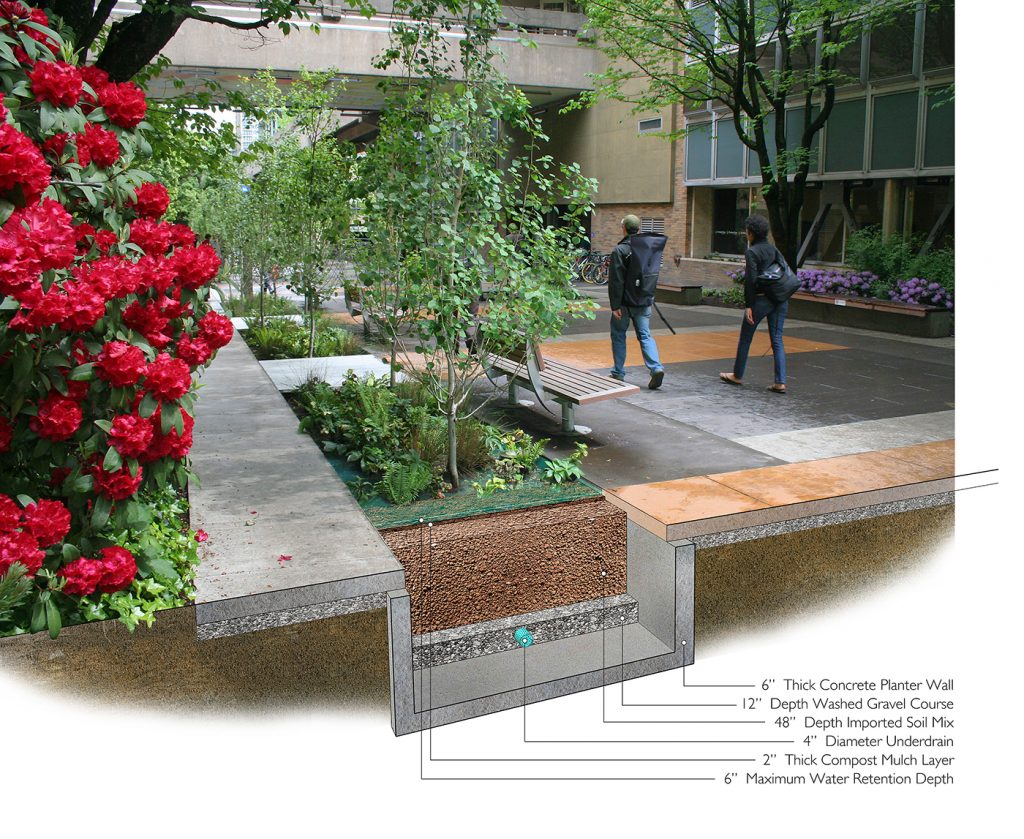 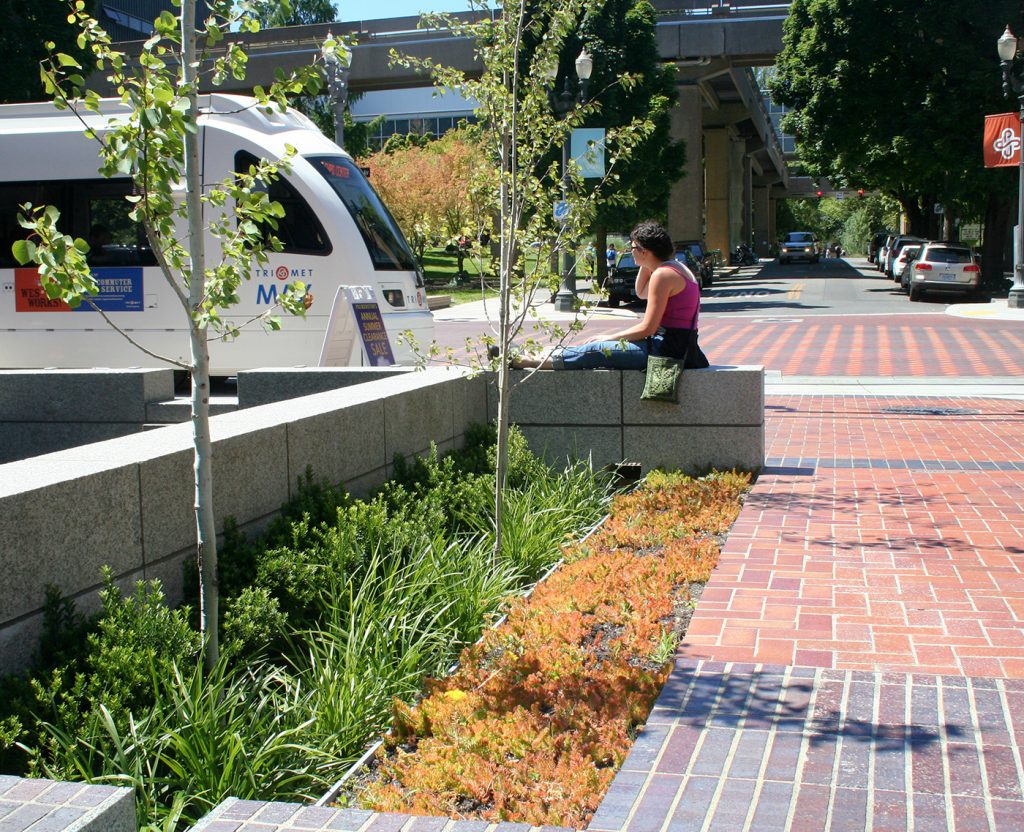 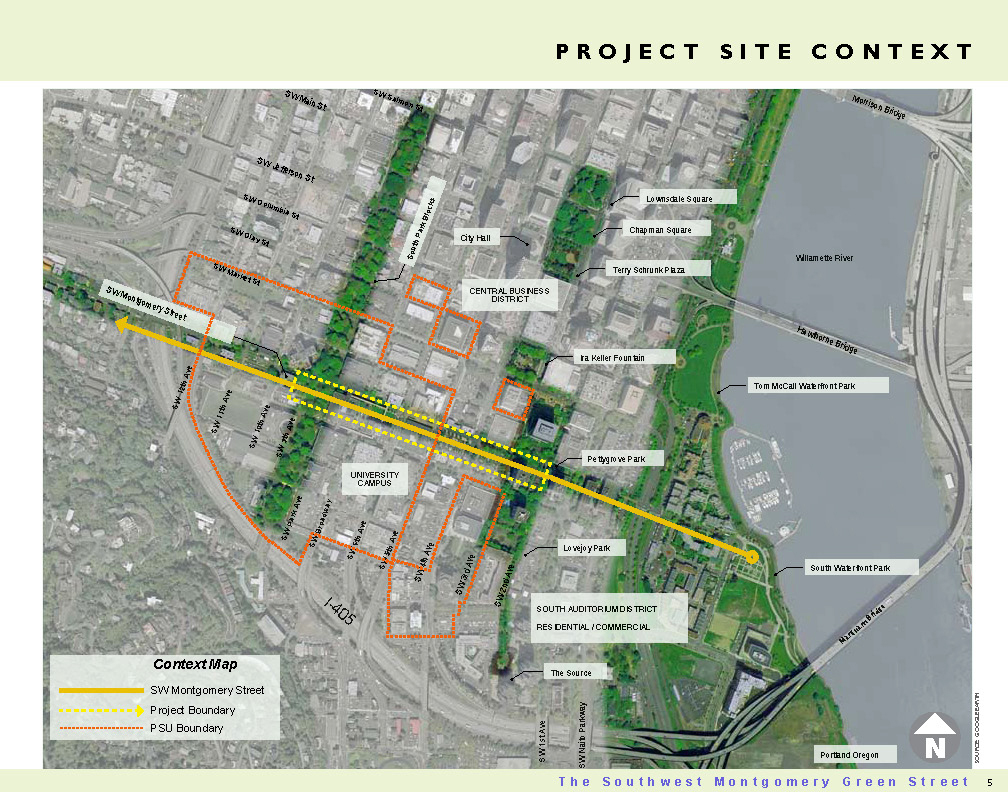 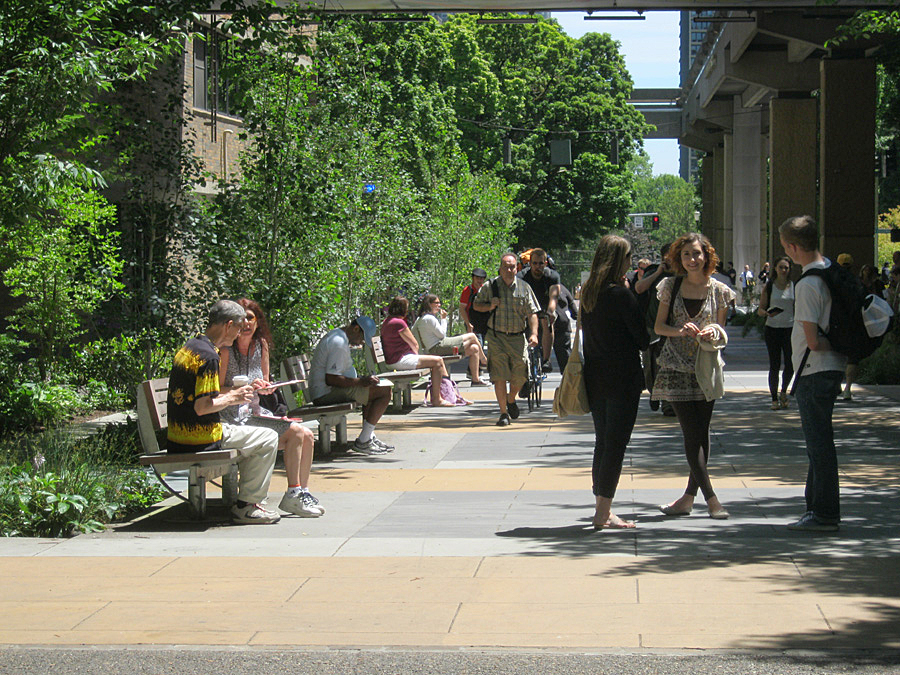 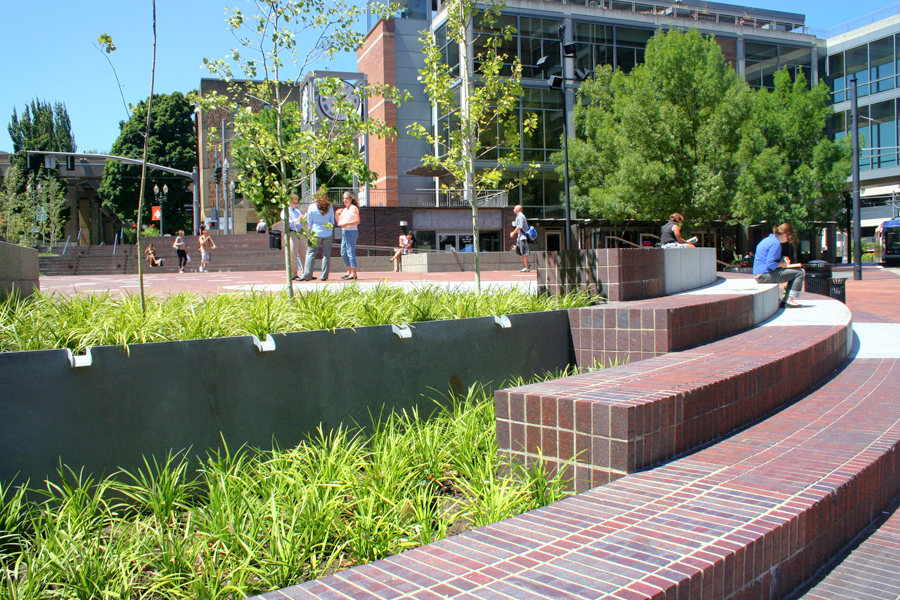 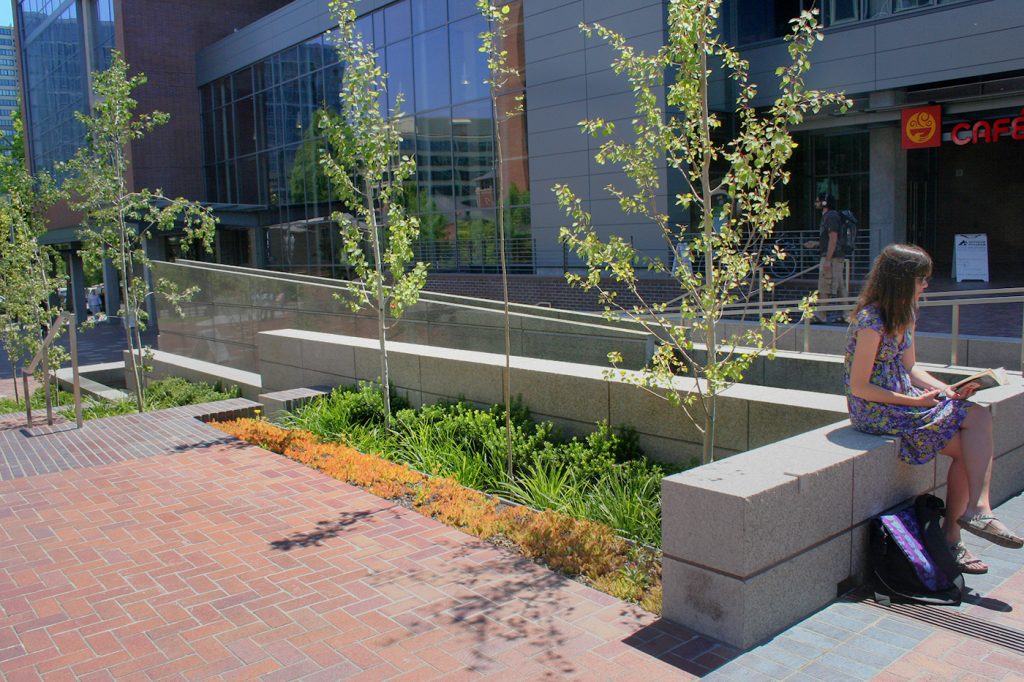